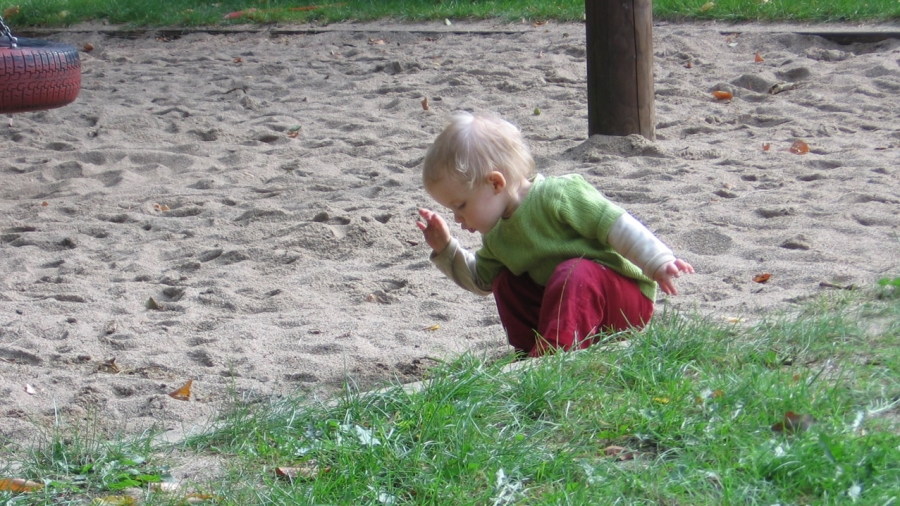 You are breastfeeding a baby or toddler, and want to transition to a raw diet? Wondering, it this is possible, and safe for your child? Will your breastmilk become somehow contaminated, oder will it become less? Would it be better to wait until your child will be weaned?
What is the way to transition to raw while breastfeeding? Is it possible, and safe, to feed your child with raw food only, right from the beginning?

As people keep asking questions like these, i decided to share my experiences with all this in this article today. 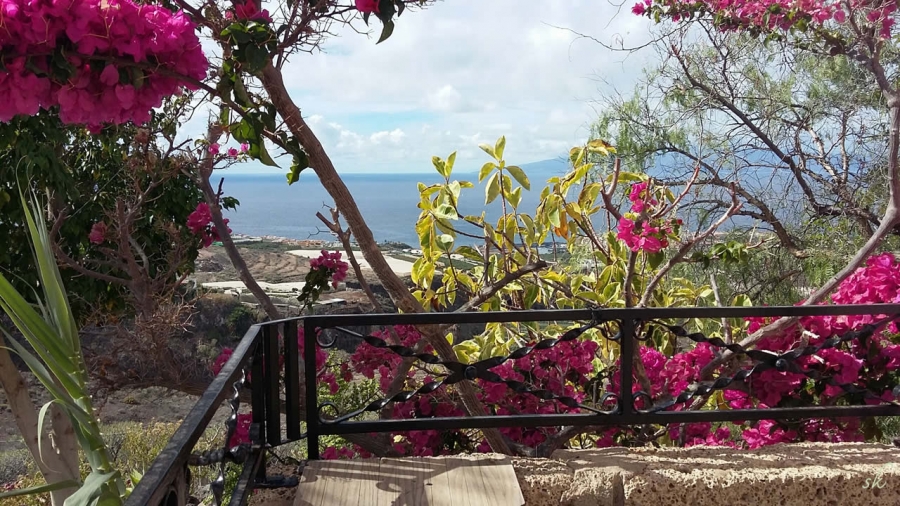 Maybe you have seen it, at Instagram or Facebook: i moved on to the next place in my nomadic life. And feeling endlessly blessed, rich .. so grateful, i hardly find the words to express my feelings. Life is good! ALWAYS providing me with what i need. 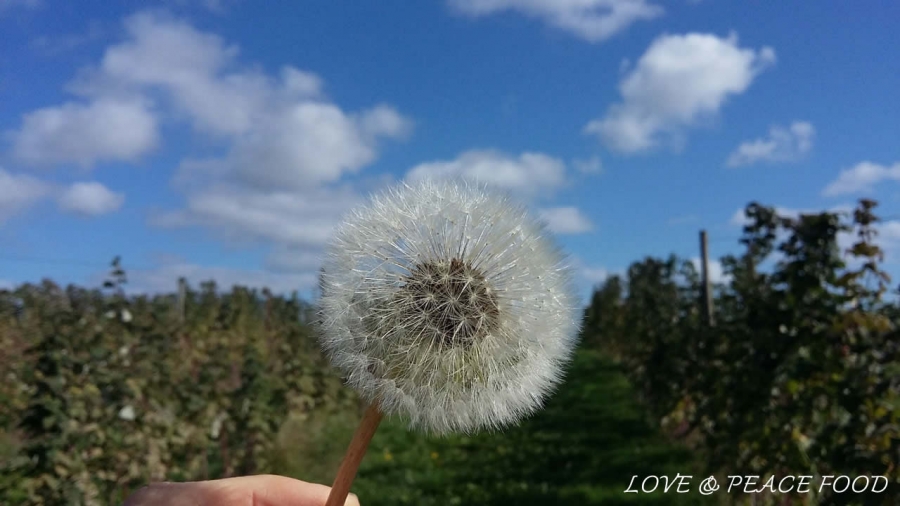 Compared to many people in this part of the world, my lifestyle is quite minimalistic. Not much material safety. Minimalism, though, is not limited to material things. But, even more, refers to my mindset, my attitude, the way i handle life and its challenges

Years ago, mostly unaware of this, i started getting rid of stuff. Material ballast. Overcoming some of my fears and finding new courage … a journey still going on and leaving me feeling more and more free with each step.

Liberate yourself by practised minimalism, in all respects. 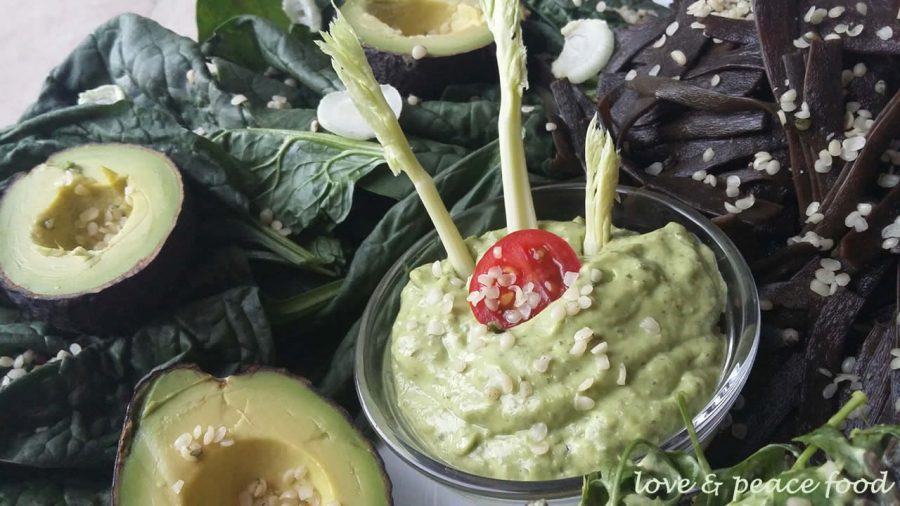 Some days ago, i came up with this delicious, addictive and very nourishing raw vegan mayonaise. Slightly green, too – fitting in with my highgreen favourite dinners. 😉

I did it several times during the last days, and now want to share the recipe with you. Cause you, too, might need something savory after all this sweet chocolate stuff i posted here lately. 🙂

So here it is, the recipe for raw vegan green mayonaise 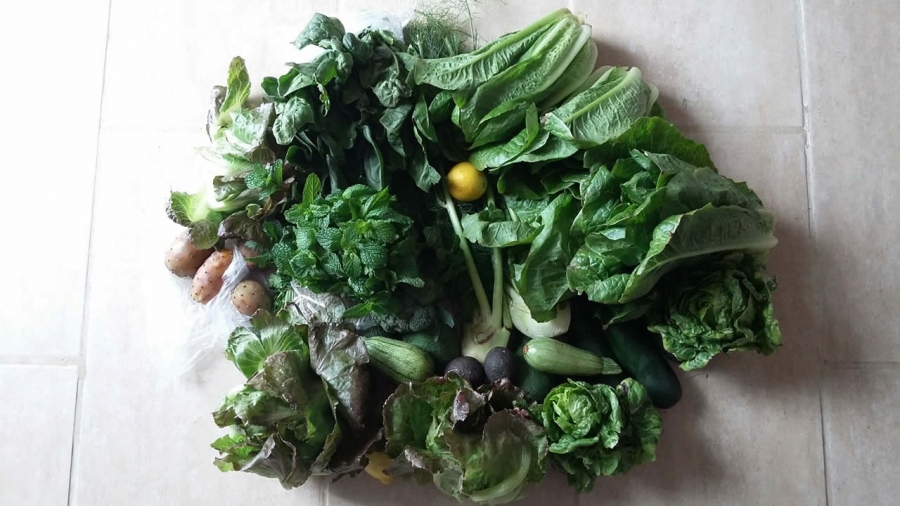 “Each of our cells is made of parts of the world that we have absorbed and transformed, all of which are enchanted food.”

A quote by Catherine Newmark.

Nutrition, but also everything else that nourishes our body, mind and soul, contributes to our health. Disease is not a consequence of viruses or bacteria, but a reaction to what we absorb.

Our body is doing its best to detoxify. To cleanse. To heal. All the time. Aging, too, is not as inescapable as you may think. What commonly is thought to be unavoidable is also a consequence of your diet, your habits, your mindset and living in accordance with your soul. 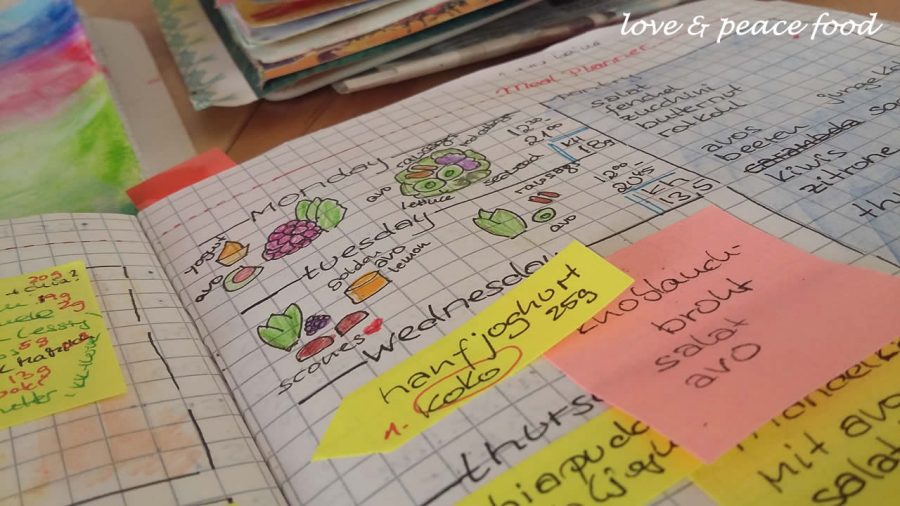 Planning your meals can be a powerful tool in transitioning your diet and in establishing healthier eating habits.

Do you plan your meals? Weekly, day by day, not at all?

Read here, how i do it. Why i do it. And how planning your meals can help you transitioning to a healthier, more conscious way of eating.

How much and how accurate i plan my meals differs a lot, depending upon my current situation. If travelling, staying, the possibilities of getting my food and so on.

Note: Of course you don’t necessarily need to plan your meals to succeed and thrive living on a raw diet! It CAN be a great tool for transitioning. And, for regaining your balance if necessary.

Me, i did not do any meal planning when going raw so many years ago. I simply enjoyed this newly discovered abundance. And most of the time, i still live and eat like this. Just in times, like now, i plan my meals. Why, how, and how meal planning might be helpful for you too – this is what this article is about. 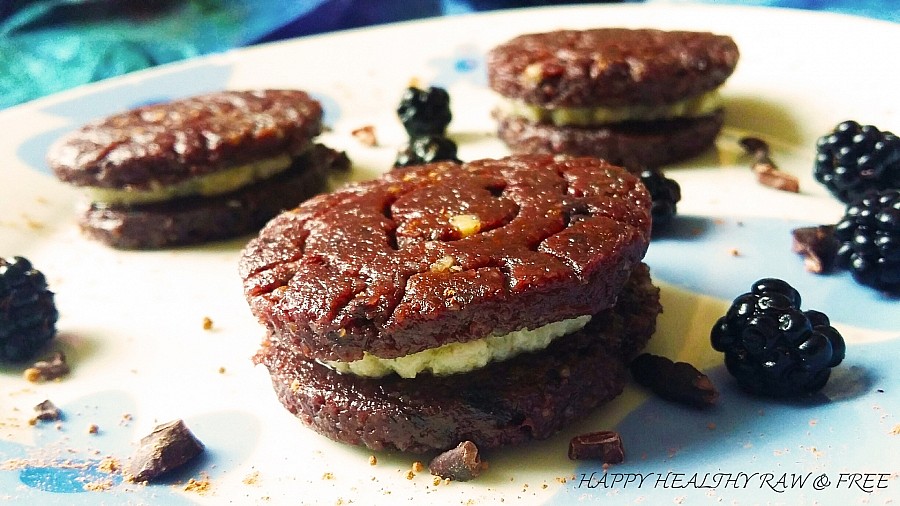 Today, i spontaneously created these lowcarb raw vegan o*reos … aka rawreos … and they turned out addictively delicious! 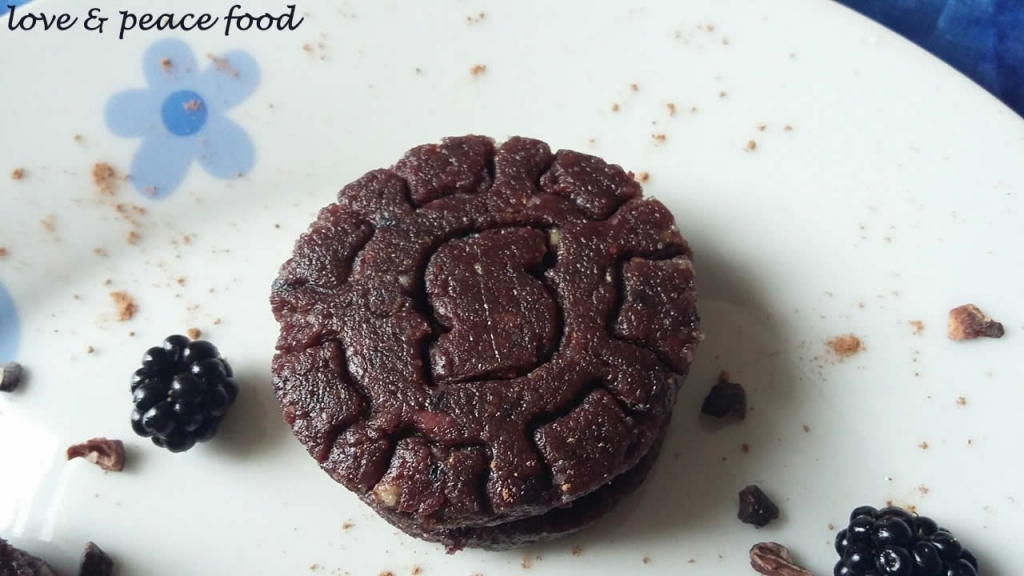 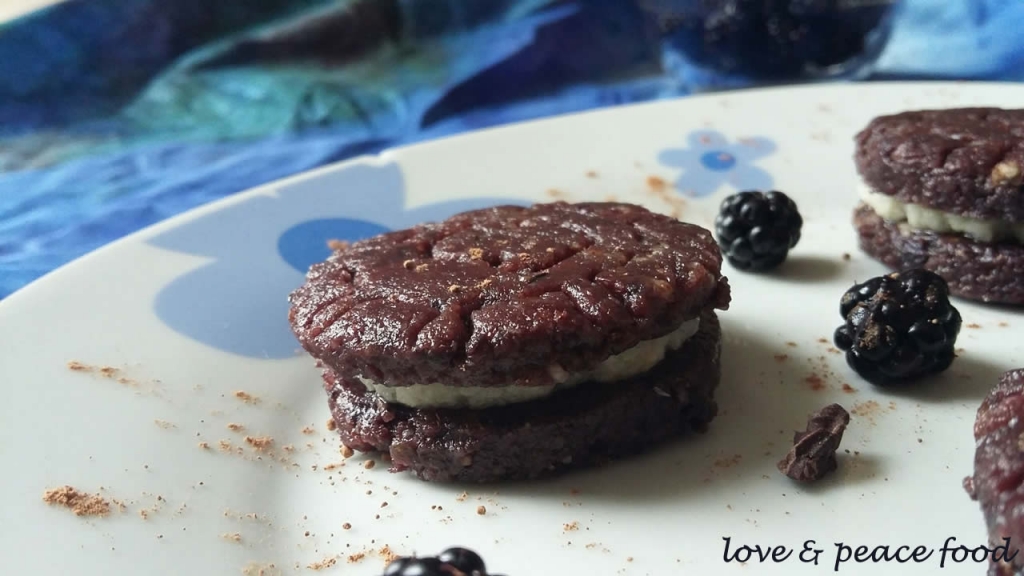 So here it is: the recipe for keto rawreos: 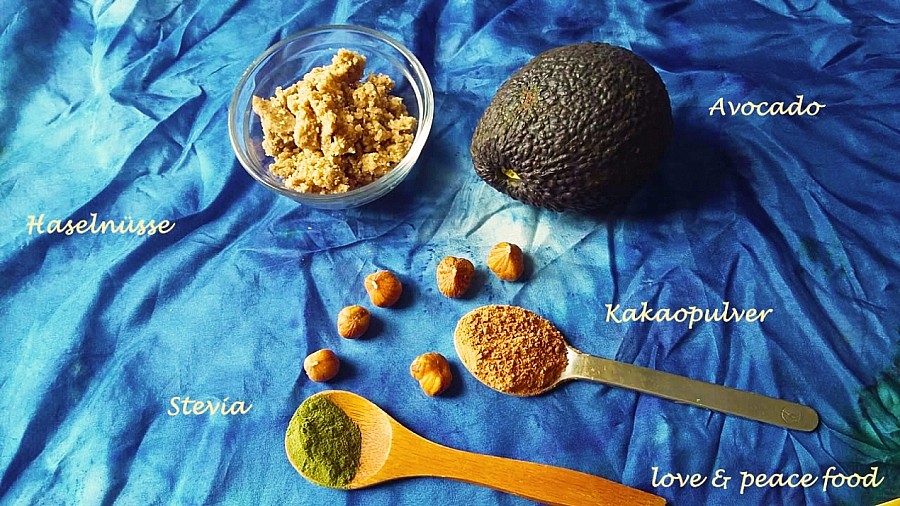 No matter, how much i have to do (and there is a lot these days), i do eat at some point in between. So new recipes are coming up all the time. Lately, i created this new variation of a raw, vegan, lowcarb (keto!) nut nougat cream. One more RawTella. Delicious and absolutely addictive 🙂 … yet much better for your body than all these nut nougat creams your supermarket offers. And sometimes it just has to be chocolate, no?! 😉

This is a very fresh version of RawTella, so you cannot store it and have to eat it right away. No self-discipline needed 😉 😀

So today i want to share the recipe with you. Here it comes! 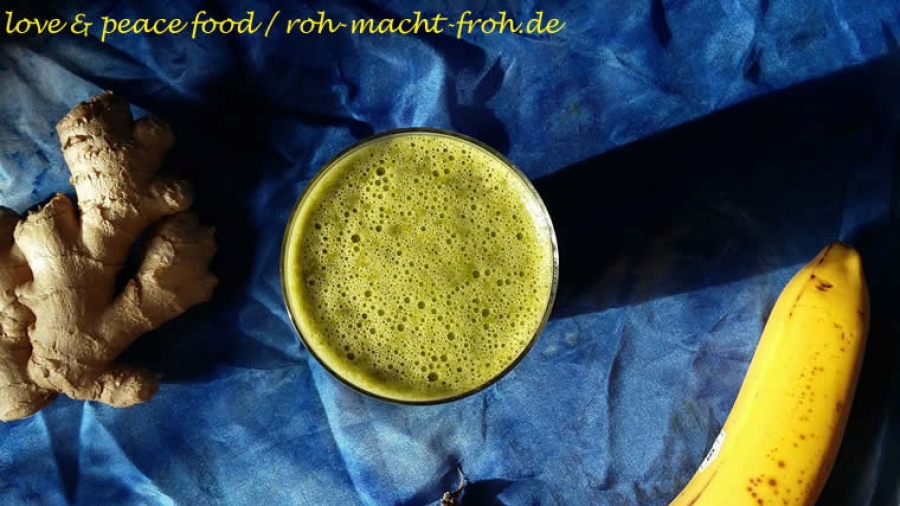 Autumn is here. Trees are dressed in their most colourful leaves … letting them go one by one. They know that it takes time to rest in order to grow.

Every year in autumn, i am coming back to the ayurvedic wisdom, to spices – and to the most delicious golden milk, aka turmeric latte. Which, originally, is not vegan nor raw. So today, i am going to share my raw vegan fruitbased lowfat recipe with you.

While western medicine does not care about change of seasons, except of calling people to get their flu shots in autumn (which i don’t recommend to do!), healers in the eastern world, both in TCM (traditional chinese medicine) and Ayurveda (traditional indian medicine), know that while transitioning from one season to another, we have to take special care of ourselves, our bodies.

In chinese five element theory, each season is associated with one element: wood for spring, fire for summer, metal for autumn, and water for winter. In transition periods between seasons, food is recommend to be chosen primarily from the fifth element, earth, and that is thermally neutral or warm. I. e., food that will ground you, calm you, nourish you.

In Ayurveda, everything has a dosha. Vata, Pitta, or Kapha. Each person’s constitution matches on or a combination of two or all three doshas. Seasons, times of the day, phases of life, they all are associated with the doshas. During autumn and winter, Vata is dominating. With it’s elements of air and space, it brings wind, movement, aridity, and cooling – all of which tend to bring Vata out of balance. While also people with main dosha Pitta or Kapha can be effected by this, Vatas are the most prone for this.

In order to rebalance, warmth, humidity and rest are recommended. Talking about food: sweet, sour, and salty food. All of these will warm and moisten your body. Nothing cooling (like icecream, tomato, melon). Try to use warming spices and herbs like ginger, garlic, basil. Maybe a bit more fat than in summer.

Especially when located in cold areas, i enjoy golden milk drinks almost on a daily basis. Sometimes adding some green in 😉 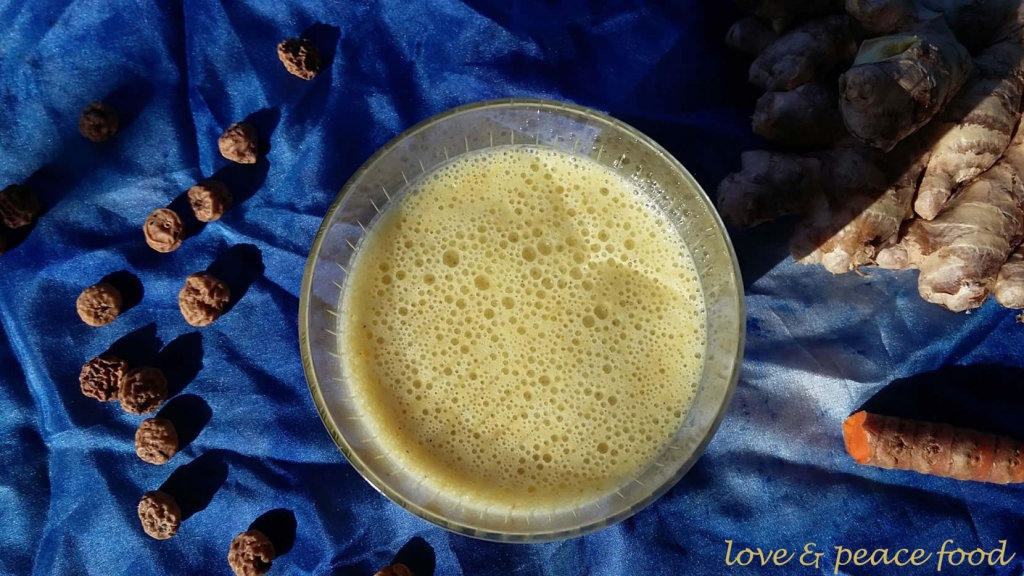 – Light, sweet, warming, moistening, grounding. Including lots of turmeric, one of nature’s superfoods.

Blend all ingredients in blender until smooth.

*For tiger nut milk, soak tiger nuts over night and blend with triple amount of water in a power mixer. Strain and enjoy.
If you cannot get tiger nuts, use any other homemade raw nut or seed milk of your choice. 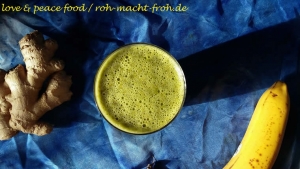 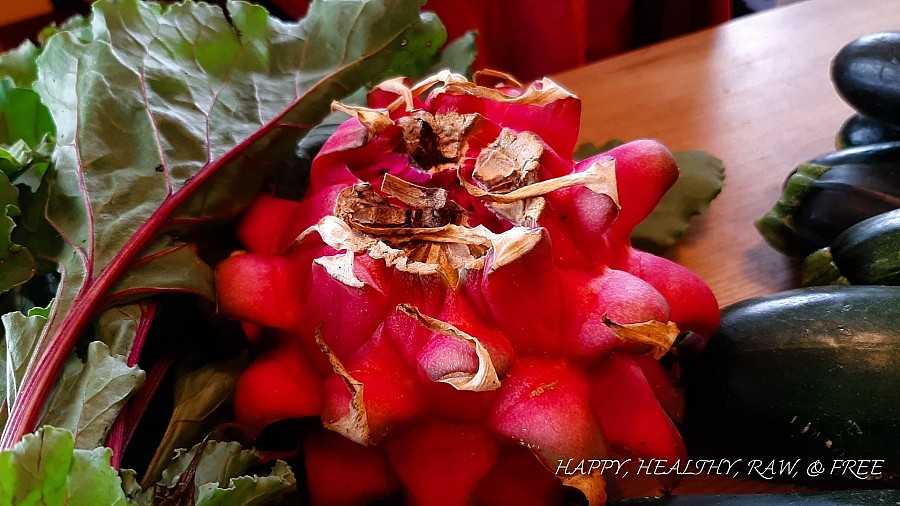 Want to get more happy healthy raw inspirations directly in your mailbox? And never miss a new inspiring post or recipe here?
Click this button and subscribe to my free inspiration mails!

if you like my blog and want to give something to me in return, you can send me a donation via PayPal by clicking this button :)

thank you for being here!

Check out my eBooks

so many people seem to look at their lives now jus

It is only here in southeast asia that i ever tast

Remember to take good care of your body! Listen to

"Spring is springing as I am singing of love and g

"Life will give you whatever experience is most he

Back in Bangkok, one more week here. Again in a hu

today's lunch ... too good to describe with words

"Not all those who wander are lost." (J.R.R. Tolki

Yesterday i found out about a little market in thi

"Trust in dreams, for in them is hidden the gate t

for all those in need for a peaceful moment. ❤ .

Some impressions from the street market. This is w

One more amazing day on this journey. A little adv

"There is a morning inside you waiting to burst op

do what makes your heart happy. there will always

already here for half a moon. first full moon i se

today's rawfood paradise 🌟💚 such a pleasure,

Thank you for being here!

I am always happy to hear from you!

Send me a message

if you like my blog and want to give something to me in return, you can send me a donation via PayPal by clicking this button :)

thank you for being here!

Love & freedom, that's what keeps me going, that's what i live for. Living it, following my heart, as best i can.
With the way i am nourishing my body, mind & soul, in my whole lifestyle: living on raw vegan food, living a free nomad life.

What began as a rawfood blog here has grown with me, and now i am writing lots of things i am engaged with, about what makes me happy, and what is challenging me.

I have been eating raw since 2006 ... a journey that includes so much more than merely a transition of your diet. Rawfood, natural and unprocessed food, creates space for healing. For your body, soul and mind. It is leading you to a conscious life style and has the potential to free your whole being from all kinds of blockades - intoxication, conditioning, limiting beliefs. On all levels - physical, emotional and spiritual. Make your choice ... for LIFE. Based on LOVE ... to yourself, your body, our world, ALL.